The UFC is heading to Toronto for the UFC 231 pay-per-view card.  I’m actually going to be in attendance at this card, so I’m very excited and I actually think it’s a great card.  Max Holloway vs Brian Ortega is a perfect title fight with two guys in their primes and Shevchenko vs Jedrzejczyk for the women’s flyweight is another great tilt between two of the biggest names in women’s MMA.  Outside of these title fights there are plenty of other big names on the card including Alex Oliveira, Gunnar Nelson, Jimi Manuwa, Thiago Santos, and many other top Canadians and great prospects.

I’ve added my picks for the five main card fights below.  The odds are taken from BetOnline.ag, our top rated betting site for MMA.  Check out our full BetOnline review here. 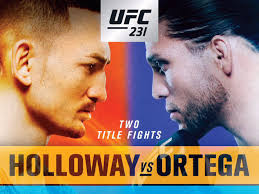 This is my favourite bet of the night hands down.  I think Holloway’s aggressive, volume striking style will overwhelm Ortega en route to either a late finish or a unanimous decision.

Yes, Ortega is one of the most dangerous guys in the division.  If he gets you wrapped up there’s a good chance you’re going to sleep and his striking has improved into a very dangerous weapon itself.  That said, his opponent has to make a mistake that he can capitalize on.  He doesn’t really mount his own offense.  He’s a counter puncher in his striking and for as good he is at jiu jitsu, he doesn’t really go for takedowns, instead capitalizing on his opponents over-aggressiveness, or wrapping himself around an opponent while they’re standing, from the clinch or against the fence.  I don’t think Holloway will walk into a big punch, and I think his fight IQ is too high to go for a takedown or put himself at any risk of being submitted.

Holloway is on a 12 fight winning streak in the UFC, beating the top fighters in the game.  He often wins the fights from bell to bell just overwhelming opponents with constant volume striking that is extremely high level.  He’s only been finished once and that was way back in 2012 in his UFC debut against Dustin Poirier.  Since then his only other two losses came in 2013, both decision losses against Dennis Bermudez and Conor McGregor.  This guys hasn’t lost in over 5 years and even against Bermudez and McGregor it was actually wrestling that beat him.

I don’t see Ortega taking Holloway down in this fight and I think his volume striking will make it very difficult for Ortega to throw up any submission attempts while they’re both standing.

Holloway at basically pick’em odds in this fight is an absolute steal.  As long as he truly is healthy, I see him avoiding the danger and cruising to victory in this fight.

Shevchenko is finally going to get to fight for the 125 pound title and she will be doing so against another big name in Jedrzejczyk.  These two have actually fought three times before in amateur kickboxing way back in 2006, 2007 and 2008.  Shevchenko won all three of those fights.  That said, the fights were 10 years ago and both fighter has grown a lot since then.

I give Shevchenko the edge on the mat in this fight.  She’s also the bigger fighter, coming down from 135 pounds, while Joanna is coming up from 125 pounds.  This should give her an advantage in the clinch as well.  Add in the fact she beat Joanna three times in kickboxing fights and I think Shevchenko is a clear overwhelming favorite to win this fight.

Joanna likes to stick and move, and get in and out of the pocket against opponents.  That works well in the women’s divisions because only the truly elite are top level strikers.  Unfortunately for Joanna, Shevchenko is definitely one of those elite strikers, and she’s a counter-striking specialist, so I see her getting the better of the striking exchanges as well.

Overall, I think Valentina has the advantage everywhere in this fight, so I’m taking her to get the win.

Gunnar is back after over a year hiatus following his loss to Santiago Ponzinibbio.  I think Nelson is one of the most dangerous fighters in the division and I expect a big win from him to get his name back in the mix.  He’s an elite grappler and even though Oliveira is a very strong wrestler, I expect Nelson to get the better of those exchanges and find a way to sink a submission in.

As long as Nelson can avoid Oliveira’s power on the feet I think he wins this one.

Dawodu is a big prospect coming out of Canada, but he really hasn’t impressed me in his UFC career to this point.  He lost to Danny Henry via guillotine choke and then only won via unanimous decision over Austin Arnett who is probably the easiest to hit fighter in the division.

Bochniak has gone back and forth between wins and losses in his UFC career and he’s coming off a loss to Zabit Magomedsharipov who is the brightest prospect in the division.  He fought well in that fight even though he clearly lost.  Bochniak has big wins over Brandon Davis and Enrique Barzola, so he has definitely faced the harder competition in his UFC career and he’s still put up wins.

I like Bochniak to pull off the upset in this one.

Manuwa’s stock is low right now after a couple losses in a row, but before those losses he was being touted for a title shot.  I was never that high on Manuwa, but I’m also not low on him.  He has power in his hands and if he lands the right shot he can knockout most opponents.

Santos is the better fighter, but he is susceptible to knockouts.  I give a slight edge to Santos to get the knockout first in this fight, but I really think it comes down to which guy lands clean first and at these odds I think the better betting value is on Manuwa.

December 3, 2018 Posted in MMA Fights by NdeJonge • No Comments

My name is Niko and I'm a massive MMA fan that has been following and betting on the UFC for several years.

I give my top bets for every UFC card and the higher profile Bellator events above.

I hope you enjoy and if you have any questions don't hesitate to contact me.