A busy month in the UFC continues after Daniel Cormier defended his heavyweight belt with a second round submission over Derrick Lewis at UFC 230 last week.  This week the UFC heads to Denver for a solid Fight Night card headlined by the Korean Zombie and Yair Rodriguez.  There are really four high quality fights on this card with Cowboy Cerrone vs Mike Perry, Raquel Pennington vs Germaine de Randamie and Joseph Benavidez vs Ray Borg the other big fights this Saturday.

I have betting picks for these four big fights below.  All of the odds I’m using are taken from BetOnline.ag, our top rated betting site for MMA.  Here’s our full BetOnline review for you to check out if you’re interested in opening an account and placing some bets. 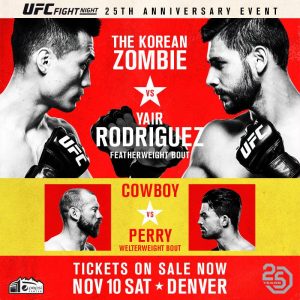 Yair hasn’t fought in a year and a half.  In his last fight he was absolutely destroyed by Frankie Edgar and it seems that was too quick a jump in competition for the young Mexican fighter.  Since that fight Yair and the UFC had some issues with Yair actually getting cut for not taking a fight with fellow rising star Zabit Magomedsharipov.  The UFC reinstated Yair and booked him for a fight with Zabit, but he pulled out of the fight with an injury.  It was pretty obvious that Yair did not want to fight Zabit, so the injury was questioned by fans.  That said, I think it was smart for Yair to avoid Zabit.  Magomedsharipov is the complete package and Yair wanted to avoid a second loss after his big loss to Edgar.

All of that said, I think this is a good spot for Yair to return.  He’s fighting the Korean Zombie who only has the one fight, a KO win over Dennis Bermudez, since returning from military duty.  That was his only fight since 2013, so there are still significant questions about Chan Sung Jung, considering that the sport has changed significantly since 2013.

I do not think Jung will have a big wrestling advantage, which should result in this being a kickboxing fight.  Rodriguez has a very dynamic striking style and if this fight stays standing I give him the edge.  He’s the younger fighter and people seem to have forgotten the potential he showed before his Edgar fight.

I thought this fight would be closer to a pick’em.  Yes, Cerrone is getting up there in age, but he still has a strong kickboxing game and will be without a doubt the more technical fighter of these two.  Cerrone’s losses have all come to top fighters in the welterweight division and I’m not convinced that Perry matches that criteria.

Perry is coming off a split decision win over Paul Felder, but Felder broke his arm early in that fight and Perry still barely won.  Before that both Max Griffin and Santiago Ponzinibbio beat Perry via decision and it seemed like the book was out on the dynamic striker.  I still believe that the book is out on Perry and that Felder would have won that last fight if he didn’t break his arm.  If Perry loses that fight then he’s the 2-1 dog in this fight rather than the 2-1 favorite.  That alone is enough to convince me there is value on Cerrone.  Add in the fact that Perry is not a big welterweight, which is something Cerrone has difficulty with, and I think Cowboy has a great chance at winning.

Yes, Perry is training at Cowboy’s team, which is a concern, but looking at pure skill levels I think Cowboy is at a higher level.  It will be difficult for Perry to make up that skill level difference with strategy.

My third underdog in a row.  I like Pennington in this one.  Germaine de Randamie became public enemy number one among UFC fans after refusing to defend the 145 pound belt against Cyborg after defeating Holly Holm to become the first women’s featherweight champion in UFC history.  She also hit Holm after the bell a couple times in that fight, which added to the dislike.

De Randamie barely won that fight with Holm and that’s really her only good win in the UFC.  Before that she fought a couple no names after losing via first round TKO to Amanda Nunes back in 2013.  We really don’t know how De Randamie will match up against a very good grinding fighter like Pennington.  I also believe De Randamie has one foot out the door as is shown by her inactivity and her refusal to fight Cyborg.

Pennington is coming off a tough loss to Amanda Nunes where she was simply outclassed.  Nunes is the best 135 pound female fighter of all time though and she beat De Randamie in one round, so MMA math would actually indicate Pennington should be the favorite.  That said, Pennington lost a split decision to Holm, so the MMA math works both ways.

That said, Pennington has the better wins (Andrade, Tate) and has improved significantly over the course of her UFC career.  She is the less athletic of the two in this fight, but she has a great grinding game and she should do well up against the fight and on the mat when she gets the fight there.

Benavidez returned and lost a split decision to Sergio Pettis after 1.5 years away and now he’s not even a favorite over Ray Borg.  Yes, Borg is a solid fighter, but he only has one high level win in his entire career (Jussier Formiga), while losing to Ortiz, Scoggins and Demetrious Johnson, once getting to that next level.

I expect Benavidez to be the better man in this fight and to prove that at 34 years old he still has plenty left in the tank.

November 6, 2018 Posted in MMA Fights by NdeJonge • No Comments

My name is Niko and I'm a massive MMA fan that has been following and betting on the UFC for several years.

I give my top bets for every UFC card and the higher profile Bellator events above.

I hope you enjoy and if you have any questions don't hesitate to contact me.